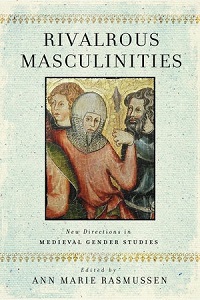 Bionote: Dr. Mielke graduated with a PhD in Medieval Studies from Central European University in 2017. In 2017-2018 he was a Global Teaching Fellow at Al-Quds Bard College for Arts and Sciences in East Jerusalem. He is currently the Executive Director of the Beverly Heritage Center in West Virginia, USA.

The goal of this book is not only to provide material for teaching undergraduate students (a primary though not exclusive goal), but also to expand the scope of masculinity studies. “Rivalrous” masculinities are described here as being the study of how images of the male body and masculinity have changed over time. Ideas about masculinity are in rivalry here, not the men themselves. This book will be reviewed by these rubrics.

This volume begins with “A Word to the Wise” by Lees. The first part is a historiographic overview of masculinity studies since the 1990s. It identifies the trends of the field, such as history, which in general treats masculinity as an identity issue while literature treats it as a sexuality issue; the hope is that this volume will help reconcile these differences. The second half focuses on a tenth century poem for secular elite men entitled “Precepts”, which deals with the topic of how men learn to become men. It is a great introduction and a thought-provoking analysis.

Overing’s analysis of the inner turmoil of men in Beowulf entitled “Men in Trouble” is, at its core, a decent literary analysis. This article aims to tackle a difficult topic, but it is hampered by structural issues. As a result, it does not contribute as significantly to the volume as it could.

Lembke’s comparison of medieval and early modern Jewish tales is thoroughly excellent and approachable. It is clear in its scope and purpose and follows through with a careful analysis of how and why a thirteenth century and seventeenth century tale of a Jewish man marrying a demonic wife changes over time. It is particularly revealing that in the internal conflict a Jewish man has to struggle between balancing his devotion to his family as well as his religious studies. It pulls off a delicate comparison and contrast between these two instructional tales, in particular, the question of what an ideal married man’s relationship should be with his wife. I cannot recommend this article enough.

Cox’s “The Knight vs. the Courtier” discusses the problem of masculine identity for French noblemen, knights and courtiers in the sixteenth century. Class conflict is central in this work and the “rivalrous” nature of masculinity is central to the author’s argument and analysis. Due to Francis I and Henry II increasing the number of educated courtiers with a legal and humanistic background, an identity crisis for the traditional nobility who gained royal favor through warfare was created. This led to the nobility creating educational system that suited their means and identities as well as pursuing private duels as an over-correction of what “feminine” traits they acquired from book-learning. Henry III of France is treated in a balanced manner and is taken as the crux of this crisis of masculinity.

“Misogyny, Philogyny, Masculinities” by Psaki is primarily an analysis of a c. 1371 poem by Antonio Pucci which aims at a defense of women without resorting to defending or reinforcing the misogynistic stereotypes it argues against. The poem itself is a dialogue over 82 stanzas wherein one voice accuses specific women from history, while the other defends them, presenting their side (which Psaki notes is quite a novelty). This analysis proves itself to be a great piece to read in tandem with Pucci’s contemporaries like Dante and Boccaccio.

Wieben’s article “Virtù” focuses on issues of masculinity and identity for churchmen in fourteenth century Lucca. Religious men of that time and place fought back against the “feminine” stereotypes of their profession by whoring and fighting, as well as by imposing control on the sexual, martial, and power-craving behaviors of secular men. Wieben argues that in this context, female litigants at ecclesiastic courts who claimed spousal abuse were received with a great deal of sympathy as a result of these tensions between lay and secular men. Men of the cloth were particularly vulnerable to attacks on their masculinity since they were denied many of the typical rites of passage such as marriage or establishing a household. The percentage of cases the author examines make up only a fraction of the whole, but the conclusions within these case studies are valid enough.

Karras reviews Late Medieval understandings of the relationship between the Biblical figures of “David and Jonathan: A Late Medieval Bromance.” This analysis focuses on four fifteenth-century texts, including “a Latin Bible commentary, a French drama, and two metrical retellings, one in Middle English and one in Old Yiddish” (158). These texts emphasize the marriage of David with Jonathan’s sister Michal, but Karras concludes that the love between Michal and David and Jonathan and David runs parallel. In other words, the relationship David has with both is essentially separate but equal, even if David and Jonathan’s relationship is not one of romantic or sexual love in these texts.

Wolfthal makes the only nod in this book towards classes of men that are neither elite nor religious with “When Did Servants Become Men?”. Using sources of art history (mostly fifteenth and sixteenth century and north of the Alps), the author uses a variety of methodologies to point out how the positions, gestures, dress, and relative size of the scenes which feature male servants  show how in every way they are meant to be of subordinate status. Wolfthal tries to make the case that artists would have understood the hierarchies of servants in their depiction, yet only produces one example where that is actually the case. Servants were differentiated from peasants, but Wolfthal argues that both male and female servants were viewed by the elites as being “not quite men” in the sense of their dependency on their employer. Urban and merchant elites tended to depict male servants more in the matter of monks or religious men (though again only one folio is consulted in this manner). Overall, this is a great work and a solid analysis, though the conclusions, as presented, seem to come from a small sample size.

Lochrie’s “Medieval Masculinities without Men” aims to understand this theoretical method through examining female and trans masculinities. Various vignettes from literary texts are cited where women are perceived or discussed as being masculine by their actions, religious nature, public presentation, or even through travel narratives. The largest section focuses on episodes from John Gower and Christine de Pizan wherein women are transformed into men. This is the only section where the article is focused and has a clear purpose.

Finishing off the volume is “The Beloved Disciple” by Kraas. This delves into the story of the Beloved Disciple sitting at the right hand of Jesus - in The Da Vinci Code, this figure is identified as Mary Magdalene. In the past one thousand years, Jesus has appeared older, taller, and bearded, while the Beloved Disciple has appeared younger, beardless, and usually effeminate. The medieval mysticism of this relationship, often compared to a marriage, is something that has led to the debate about whether or not this was meant to be interpreted as a homosexual relationship.

Does this book fulfill its own goals? Could this book be used as a tool for teaching undergraduates? Is this collection of essays effective in communicating its ideas? The answer to all three questions is yes, though I think certain points of clarification need to be made in regards to my affirmative answer. For instance, Lees’ laments that religious and elite men tend to predominate in studies of masculinity in general. This volume only focuses on elite or religious men and women. Wolfthal’s article on male servants in visual culture is absolutely fascinating, but the conclusions ignore the fact that these artistic pieces which depict servants as more gender neutral come from the elite; the servants here are objects of this study, but the subject is rather how artists working for elite patrons interpret domestic workers. Even if this volume replicates the problem of minimizing poorer, disenfranchised, or lower-class medieval men, it is at least aware that there is a problem in the first place.

As far as the timeliness of this work is concerned, the studies in this piece are incredibly relevant today, and overall, do an excellent job of connecting the works of Chaucer and Gower to present-day issues of identity. I would have loved to have the Karras and Kraas articles on hand when teaching my Palestinian students at Al-Quds Bard College. Part of the curriculum required delving into very difficult topics on Biblical sources and the two authors explained very complex issues in a clever, useful way. The works of Lembke and Psaki stand out for their high quality; they could easily be used in any Gender Studies class since the scope of their work focuses on the relationships of women and men through the lens of masculinity. The works of Overing and Lochrie lack any clear structure or argumentation, so assigning these works for an undergraduate course would no doubt engender a lively discussion - perhaps not for the reasons the authors intended, however.

Nonetheless, the collection of essays here is a great and wide-ranging selection on a topic which is both central and absent. Dr. Rasmussen is to be commended for her work in ensuring that many disciplines are represented in this work and that the studies here provide excellent starting points for other researchers to apply these methods and theoretical approaches to their own work. I learned a great deal from reading this piece.