Erika Kispéter - Towards Deborah Jordan Brooks, He Runs, She Runs: Why Gender Stereotypes Do Not Harm Women Candidates 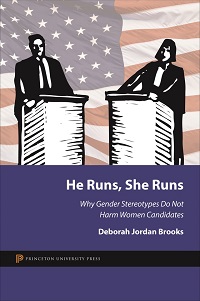 Bionote: Erika Kispéter is a researcher at the University of Warwick. She holds a PhD in Gender Studies from the Central European University in Budapest and she is interested in all aspects of gender and work and the public/private divide. Prior to her postgraduate studies she worked for a women’s rights organisation in Hungary.

The main aim of the book is to empirically test the “conventional wisdom” that women candidates who run for political office in the U.S. are at a disadvantage compared to men. Based on a series of controlled experiments focusing on public attitudes to women and men running for legislative office, Brooks argues that this widely held belief is in fact a “misconception,” based on experiences from a bygone era. The empirical findings and the more theoretical arguments presented in this book make a valuable contribution to the literature on politics and gender, but going beyond this scholarly aim, the author’s ambition is to encourage more American women to run for legislative office.

Women are underrepresented in U.S. politics, and while the reasons for this situation are complex, Brooks argues that everyone with a stake in politics, including campaign advisors, journalists, experts and women politicians themselves, believe that the public applies gender stereotypes and holds men and women candidates and politicians to gendered double standards, effectively penalizing women in politics. The book is based on a study which was conducted in 2009 - after Hillary Clinton ran against Barack Obama to become the presidential nominee in the Democratic Party, and another woman, Sarah Palin, ran as the Republican candidate for Vice President in the 2008 presidential elections. Motivated by media and expert debates about the role of gender in political campaigns and building on earlier research which questioned the all-pervasiveness of the double standards discourse, for example the work of Kahn,[1] Brooks set out to explore the validity of this belief.

As a first step, Brooks outlines five arguments which underlie the conventional wisdom about double standards; links them to relevant theories, particularly from the field of psychology; and critically evaluates the supporting evidence. This may sound obvious, however, by the end of this exercise, it becomes clear that the evidence for the newly minted “Theory of Double Standards” is rather mixed. For example, focusing on the dominant argument that voters value masculine personality traits over feminine ones, the evidence says that some personality traits which are typically associated with femininity, such as “honesty,” are more important to the public’s evaluation of potential leaders than typical masculine traits, including “the ability to get things done” (23).

In the second step, Brooks formulates an alternative theory, which she calls “Leaders-Not-Ladies.” This theory is based on three arguments: while gender stereotypes may be pervasive, women running for office are seen to belong to a different category to ordinary women; the public is less likely to rely on steretypes about candidates as information other than the candidates’ gender is revealed during the campaing; and a growing proportion of women among politicians will reduce the public’s reliance on stereotypes. In summary, the alternative theory posits that “women politicians will be evaluated by the public more as politicians than as women” (29).

As a third step, Brooks designed a series of controlled experiments to test the validity of the two alternative theories. The experiments were conducted online, on a geographically and demographically representative sample of 3,000 adults in the U.S., recruited by YouGov. Respondents were asked to read one of two articles that were identical except the sex of the fictional candidate running for office (Karen or Kevin Bailey). The articles also included information that is commonly assumed to penalize or reward candidates based on gender: the level of political experience (discussed in Chapter 4); and one of five behavours: showing anger or crying (Chapter 5); acting tough or acting in a nonemphatethic manner (Chapter 6); and making a knowledge gaffe (Chapter 7). The results of the experiments were evaluated by establishing whether and to what extent does the fictional candidate’s gender influence the study participants’ perception of the candidate.

Overall, the findings support the “Leaders-not-Ladies” theory, in other words, the candidate’s gender does not have a significant effect on people’s perceptions of them: for example, the public did not see any significant differences between the fictional candidates Karen and Kevin Bradley, running for a Senate seat, both with ten years’ experience in the Congress in terms of their overall favourability, their likely effectiveness in the Senate and their potential to become a good presidential candidate in the future. This does not mean, Brooks argues, that individual members of the public do not hold gender stereotypes, rather, and this is the key argument, that these stereotypes do not add up to an overall disadvantage for women candidates.

A key finding for women considering a political career is that when candidates lack political experience, women are viewed more favourably than men. Brooks argues that inexperienced women, but not men, are viewed as “political outsiders” who may bring positive change. Finally, focusing on potentially harmful behaviours on the campaign trail such as crying, getting angry or committing a knowledge gaffe, the findings reveal that while the public does penalize candidates, it does not penalize women more than men.

While the results are cause for optimism, and the lack of significant gendered effects allows us to refute the wisdom of double standards, the question remains: why are women underrepresented in U.S. politics? In Chapter 8 Brooks discusses potential explanations for this puzzle, including gender disparities in fund-raising, recruitment bias, media bias, and the advantage enjoyed by incumbent (who are more likely to be men than women) in elections. She finds these explanations unconvincing, and following the work of Lawless and Fox,[2] she argues that women lack the ambition and confidence necessary to run for office and that women’s unwillingness to enter politics may be partly explained by the “misperception” that public opinion is stacked against them.

This is a clearly written and carefully argued book. Its main contribution to the literature is outlining a theoretical framework for the Theory of Double Standards and the detailed, convincing interpretation of the findings that emerge from the experiments. It also offers a nuanced and in-depth discussion of the relevant literature and uses the results of the experiments to clarify concepts and refine existing arguments, for example when examining the different effects of descriptive and prescriptive stereotypes on public opinion or when focusing on the differences between a woman candidate who is acting “tough” as opposed to one who behaves in a “less empathetic” manner. The book also includes a variety of relevant and often entertaining quotes from women politicians, which add real life detail to the discussions and potentially make the book more attractive to those readers whose attention flags when reading about the results of statistical analysis.

On a more critical note, Brooks states in the Introduction that the impact of candidate gender on election results is part of a highly complex system which has many “moving parts” and warns her readers that this study focuses only on two dynamics: the role of gender stereotypes and double standards, in an attempt to reduce this complexity and design an experiment that is fit for purpose. While complexity is briefly reintroduced in various places, especially in Chapter 8, where alternative explanations for women’s disadvantage are explored, overall, the book has a narrow focus.

This brings me to another critical comment: in Chapter 8 Brooks rejects a number of alternative explanations for the lack of gender parity in politics and accepts the arguments about the gendered “ambition gap” and “confidence gap,” put forward by Lawless and Fox[3] as the most convincing explanation. This explanation neatly dovetails with the liberal feminist arguments, which centre on individual women and emphasise their own responsibility in improving their careers. Brooks’ evaluation does not give sufficient attention to other alternative explanations, in particular, to the role of gatekeepers within political parties and the role of the media in limiting women’s political careers. Brooks’ relative lack of attention paid to the potential role of media in this discussion is the most notable gap, given that earlier, in the analysis section of the book she notes “if the candidate information provided by the media is highly gendered, then experienced candidates could still convincingly be affected by gender stereotypes” (76).

In summary, Brooks sets an ambitious goal for her study and successfully challenges the popular wisdom that women political candidates are at a disadvantage in campaigns and elections because of public opinions. I would recommend the book to researchers, political advisors and the wider public interested in political campaigns, public opinion and gender. Given the salience of the topic and the timing of its publication in 2013, before the latest presidential elections in the U.S., fought between Hillary Clinton and Donal Trump, I was wondering if the book received attention outside academia? Was the author invited to political programmes on television or to meetings with political advisors?

If she was not, it may be explained by a degree of reluctance to accept the findings of the study: seeing the evidence that the American public does not seem to prefer men over women as candidates for political office may sound surprising and too good to be true - as if a barrier was suddenly removed and we all have to reevaluate the situation and our well rehearsed opinions.

[3] Lawless and Fox, “Why are Women Still Not Running.”