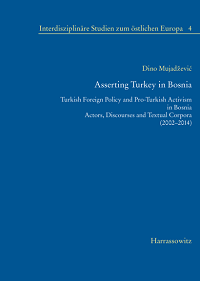 Bionote: Zora Hesová is assistant professor at Institute for Political Science, Charles University, Prague and fellow at the Institute for Philosophy, Czech Academy of Sciences.

Since the early 2010s, Turkish foreign policy in the Balkans has attracted a sustained interest. Under the rule of the AK Party since 2002, Turkey has substantially increased its diplomatic activity in the Balkans. Foreign minister Ahmet Davutoğlu, a former academic with a vision, has formulated the Justice and Development Party’s (AKP) new Balkan policy as a policy based on shared history and culture. He also declared Turkey’s special interest in the region, particularly in Bosnia and Herzegovina. AKP’s culturally and historically informed foreign policy activism has led commentators to express concerns about AKP’s neo-Ottomanism, that is, Turkey’s neo-colonialist regional ambitions.

Dino Mujadžević’s book puts those claims into the context of a detailed history of recent Turco-Bosnian relations. He answers implicit questions about neo-Ottomanism and Turkish soft power in Bosnia by analysing many facets of the Turkish presence in Bosnia. He describes the scope of mutual contacts and diplomatic cooperation, identifies state and non-state bearers of Turco-Bosnian relations and shows the motives and limits of Turkish foreign policy. He confirms that cultural and religious ties between Bosnia and Turkey were indeed enhanced by personal ties and religious affinities between Bosnian political elite and AKPs leadership, but shows also that Turco-Bosnian relations are much older,  too complex and not always mutually satisfying to support the neo-Ottoman thesis.

Dino Mujdažević is a Croatian historian. He was born in Bosnia, works at the Croatian historical institute in Zagreb and specialises in South-Eastern European history. The book is a result of a post-doctoral fellowship he completed at Ruhr University Bochum. Mujadžević offers a thorough analysis of contemporary Turco-Bosnian relations. After providing a focussed overview of Turco-Bosnian history from the end of the Ottoman era to the foundation of independent Bosnia and until the end of the 1992-1995 war, he gives an exhausting overview of the various actors of Turco-Bosnian relations and a detailed analysis of their cultural and political logic.

The author shows that AKP’s activist policy towards Bosnia is by far not the only channel for mutual relations. Turco-Bosnian relations have been cultivated from the 1990s onward by Sufi groups both of Bosnian and Turkish origin: Bosnians travelled to Turkey for religious legitimation and the Turkish neo-Sufi organisations have expanded into Bosnia to found influential institutions and media. There are sustained contacts between business groups and families, between Turkish and Bosnian municipalities and among academics too.

Turkey is seen as a partner to Bosnia and Herzegovina: it has supported it during the war and mediated a substantial improvement of relations with Serbia in the 2010s. Yet, relations between individual Turkish and Bosnian partners have not always been straight-forward, especially at the most influential level of religious institutions and Muslim-conservative political parties.

The Islamic community in Bosnia (IC BaH) is a major venue of Turkish religious influence. Yet, between the duration of the war, and roughly 2010 and 2013 its leader Mustafa Cerić insisted on showing his autonomy and even resistance to Turkish foreign policy. The reasons were the oversized expectations that Turkey had not fulfilled during the 1992-1995 war, and a different view on the politics of Islam in Serbia. Ahmet Davutoğlu has attempted to mediate between conflicting parties in the divided Islamic community in Serbia, while Mustafa Cerić strongly supported the pro-Bosnian Mufti Zukorlić’s side. In this respect, state-level relations to Serbia and political pragmatism were more important to Turkey than the self-centeredness of Bosnian-Muslim leadership. Another difference opened between 2006 and 2010, after the leadership of the Bosnian nationalist party SDA passed from Alija Izetbegović (who died in 2003) to a rival, more secular current in the party. The AKP then backed an SDA rival, the former SDA leader Silajdžić, and supported him in his fateful rejection of the constitutional reform package in 2006 and until his defeat in 2010. The privileged relations between AKP and SDA were gradually restored after Alija’s son Bekir Izetbegović succeeded in taking control of the party.

The personal side of history and its sinuous paths matter. Mujadžević shows, namely, that the relation between resurgent a Turkey and a stagnant Bosnia is not one-sided: Bosnians have not been fully controlled by Turkey and have many times taken a different path. The visible closeness between Bosnia and Turkey, in a moment when neo-Ottomanism made headlines, actually coincided with a period of good personal relations between the countries’ leaders. Since 2012, Davutoğlu and Erdoğan’s AKP encountered Bosnia under the political leadership of the Izetbegović family and under the religious leadership of Hasan Kavazović. The interests of both leaders have aligned with Turkey. The special relations are still not sufficient to guarantee a wholesale loyalty. Mujadžević has noted many independent and critical views on Turkey in Bosnia, voiced both in the media and privately, especially about the high-handedness and lack of economic substance in Turkish foreign policy towards Bosnia.

The text is unique in that it provides a wealth of details about individual actors and paints a plastic landscape of relations between various Bosnian and Turkish political and religious groups. Indeed, Mujadžević offers more than a historical overview. The author conducted two dozens interviews with well-placed informants who have helped to reconstruct the logic of personal and institutional relations. He also relied on a systematic study of pro-Turkish media in which he showed the depth of historical and cultural interest in Turkey.

By concentrating on pro-Turkish actors in Bosnia, and on the role of Bosnia in AKP’s foreign policy, Mujadžević shows the scope and uncovers the logic of the reception of Turkish soft power in Bosnia and Herzegovina. This approach was nevertheless limited to religious and “conservative” actors such as IC BaH, SDA and Islamic groups; it did not treat other actors, such as non-SDA politicians, municipalities and/or secular academics. Nor does he mention Republika Srpska or potential resistances to Turkish influence from within secularist or Islamist currents in the Bosnian society. The omitted elements are probably unimportant, but the author does not provide an assessment of the overall Bosnian reception of Turkish activism, especially knowing that the Bosnian public did grow critical of Turkey afterwards. Mujadžević also stresses parallels and correspondences between the “conservative” Islamic outlook of the AKP and SDA parties and between the Bosnian and Turkish Sufi scene but does not actually enter into a critical comparison of what are possibly very different political and religious logics. The term “conservative turn” in the AKP sense may mean Islamist or authoritarian; “conservative” actors in Bosnia may mean “nationalist.” The lack of analysis may be an advantage; it makes the book avoid ideological and political bias and leaves the reader to make his or her own conclusions.

Rather than a critical reflection on Turco-Bosnian relations, Dino Mujadžević’s book is the work of a historian of contemporary Bosnia and Herzegovina who has succeeded in producing a vivid and encompassing portrayal of Turco-Bosnian relations based on a wealth of information and original sources that are not available elsewhere. He has reconstructed a history and produced a succinct, readable and well-informed reference book for anyone interested in the workings of Turkish influence in Bosnia. His work shows convincingly that the Bosnian-Turkish relations are not the product of a neo-Ottoman policy, but a two-sided relationship in which personal relations and political contingencies play a large role. The author may have anticipated a relevant topic a little too early: his research has unfortunately stopped just before another upheaval of the Bosnian-Turkish relations - the ouster of Davutoğlu in 2014 and the coup attempt in 2016.