The Philosopher’s Vision by Anne-Françoise Schmid 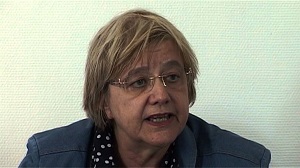 The philosopher sees the Earth, lives in the World and dreams of the Universe. He doesn’t understand that the Earth looks at him, the World deals [l’agit] with him and that he will only come to the Universe when he will be capable of inverting vision.

What is to be done? To read the poet, the one who sees, as Borgès wrote, that he has forgotten that the Moon in his poem reveals all of the beauties of the Earth. Or to read a thinking geologist, like Vernadsky, who sees the thought of the philosopher active in the terrestrial crust. The Earth is then silent, and is only perceived by the plants. La Mettrie could have taught us this in L’Homme-Plante.

This silence is profound, more profound than the philosopher believes it to be, who thinks to have seamed [couturé] his system – for example, by his exclusion of women and animals. It is the silence which reaches him when, finally, he learns that there are other philosophies as lively as his and that he must postulate the de jure multiplicity of philosophies. Therefore, philosophy is silent: only isolated philosophies are talkative [bavardes].

Don’t listen to the gossip [bavardages] too much, just enough to not be a misanthrope. We have the obligation of a silence, but a new silence, which does not result from the absence of noise.

The perception of this silence, which is not uniquely given by the senses, gives us obligations, and renewing those of the philosopher. A book of questions, a book of passions.

Take note [prenons] of height, from the universe, where some philosophers, in love with verticality, were able to bring us to a lived experience which knows how to find the Earth without the bitterness of the World. Then, we may be able to make propositions to understand how the mixtures and separations of the World (indispensable to the human subject) and the Earth (without which there would neither be birth nor death) can be mixed and prolonged in unexpected events.

Indeed, the epidemic is also the consequence of inappropriate mixtures and separations. The philosopher, if he is not too talkative, will perhaps be apt to manifest it. This manifestation is an inversion and a reciprocity of gaze [regard]. The Earth sees us, the animal sees us, the woman sees us. And the planet sees us, too. We believed we were the only ones to see.

Translated from the French by Jeremy R. Smith

Anne-Françoise Schmid is Associate Researcher at the Chair of Theory and Methods of Innovative Design, MINES ParisTech and the Laboratory of Philosophy and History of the Sciences - Poincaré Archives, UMR 7117 CNRS, University of Lorraine.