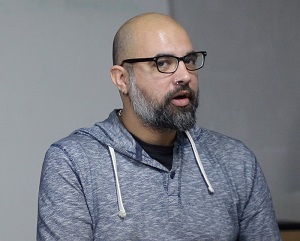 Delete the “ism.” Delete the theory of the present. No, the present is not deleted. And do not delete and obliterate theory itself, but subtract the theoretical ism from the persisting systems of thought and their practices.

Understand that there is no ideological formation to be unearthed from the perverse repertoires of the historical past. Those who flaunt the specter of new authoritarianisms and totalitarianisms should wrap their heads around the question: What is it to think these political concepts - authority and totality - without the finality of their isms? We are in a totally new situation of some sort of neomalthusianism (for lack of a better wor[l]d) which demands not only to produce a collective intelligence upending the bio/necro dyad, but to subtract and suspend the ordinary concepto-political management.

The edgelords of our world already know that. They are trained to sleep awake to the perpetual flexibility of necrocapital. We are this capital. The superfluous banter about “economic crash” or “standstill” (as if they are the same thing!) misses the point of the new situation: there is a totality and there is a power, but there is not and will not be stable political-economic system. Whatever is left of the “economy” will be determined by the necrosis of our totality.

It is true that certain regions will be more affected by the perverse awakening of despotic instincts, which have already permeated certain geographies anyway. There is nothing scandalous in suspecting that today, March 30, 2020, Orban will institute a new dictatorship. But he and his followers are no longer “Orbanites.” The same is true for Trump and “Trumpism.” Dictators there will be, but the “dictatorship” is already past a quantum leap. Let us stop correlating collectivism and individualism with communism and capitalism. These conjugations and their conceptual stench are unbearable even for the dead. We are in a new situation where the proper names will be nominated again to do new work: and this work will become visible as we adjust our intelligences to what the bullies of the world want from us. They themselves do not quite know what they desire us to be and do. But they do know we are a mass, a total mass, against which they can wage wars of the noblest type. Do not give them the comfort of “isms.”

Not to irate liberals and the center-right, but the fear of a new (viral? bacterial?) “totalitarianism” is inflated only with the superego of an ancien régime that has long been terminated. If you think I am dancing on your grave, then it means you have missed your own party long ago. Only liberals did not notice this all too timely doomsday. At least the crisis-plague (yes, it is both at the same time, hyphenated, with an ambivalent spacing in-between) will awaken the dreamers hallucinating totalitarianism from the slumber of their polit-fetish. Let us agree that the “total” of the totalitarianism is still here. But the ism is dead, long mortified.

Good: at least this might shift the attention of politicians and theoreticians to the fact that we now have to wrestle with a sleazy and incontinent totality that is difficult to reign conceptually, because the politics of this “total/ity” evolves by the hour. Whatever is instituted is far from conceptual. And once this lubricious monster called totality become totally elusive, we can finally see that there is also very little left of “biopolitics” to debate about. The actual world government is shaping up under the guise of a quantum chaos whose “management” is a mere performance of political illiteracy. But then again, who is literate enough to massacre elegantly and invisibly the present community, and the coming one?

There is no bios to manage. I do not know anymore what Foucaultians mean in their feel-good theorization of biopolitics, as if the ongoing COVID-19 pandemic was designed especially for them. Why do they want to force the present to affirm the past? I understand it is cynical to say that biopolitics is the supreme victim of the day, and not the dead of the virus, but without this cynicism it is difficult to carve the space for the irreverent and vulgar necrototality overflowing from the media. (Yes, the very same media who are now finally manifesting themselves as the parasites of every imaginable world.) There might be some parallel regimes of bio- and necropolitics going on, but on a world scale all possible scenarios make favorable an indefinite “total” of masses whose new ideological management is now being revamped.

Into what? I have no answer, not today. It feels to me that the entire local/global distinction has shrunk in a state of total worldliness. When all worldliness is entirely there, its totality smashes the art of creating concepts. Everything everywhere is total, it is just there, despite the fact the whole world is now a grand total bunker. The temptation is not only to call for suspending all biopolitical analysis (this rat has left the ship already), but to name the present “necro-totalitarianism.”

Necrototal would do it. Nobody knows what the ism of that necrototal is, and will be.

The plague is an exercise in thinking. Scientists have long advocated that plant and microbial consciousness exists. For the first time we are ready to witness - at least consciously - how does it reduce human intelligence to a natural prosthesis of contingency.

Stanimir Panayotov has recently defended his PhD  in comparative gender studies at the Central European University, Budapest. He works at the intersections of continental and feminist philosophy, non-philosophy, and late antique philosophy. He is the editorial manager of Identities.