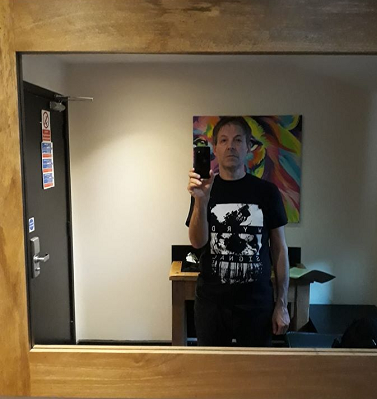 Can we afford us any longer? Bodies hurt too much. Their pleasures are less trauma than a geologic diarrhoea. It’s shameful a vaulting planetary economy still uses us - like discovering a cache of unused condoms under pristine sand.

No wonder we dream disconnection, communism, or apocalypse; bored with our biology, our perpetually retarded political instincts, or bad teeth.

It seems a “posthuman” theory must get over this prurience; to enjoy rolling over in its own shit, if only to get showered and rubberized by mechanical servants in the aftermath - and even then, we can’t do without us. We know where we are, but not who.

From this theoretical perspective, the “us” or “we” is not so much locked down, as filtered out as junk bandwidth. Think of the body unzipped by spidery insurgents, sliced from neck to sternum; then given a kind of minimal ethical purchase and other devolved responsibilities. A bare aesthetic figure, or radical metaphor.

We’ll do anything not to stop. Especially, when confronted with our redundancy and obdurate excess, our strained capacities for transitioning into another, better and more expansive quarantine.

Duration and intensity, autonomy and self-ownership; lines between personal action and sub-personal process, or lumpen behaviour; between private and intimate; between genders; individuals. None plausibly immutable or necessary, whether for extremophiles from the dim reaches of “Posthuman Possibility Space” or those of us languishing in these eroded lives.

The lockdown body - what is it for: to exercise, eat, shit, or wank through various grades of solipsistic delusion?

We’re just waiting for it to end; for this spurious mass to hold its own, aggregated into population maps, tracing drunken itineraries between notional SARS-CoV-2 vectors.

It’s a like an inflation or interspecies slash fiction: your bad lifestyle preferences bundled into a citizenship status in Clown Town. Liberal humanism, not so much a problem, as a posit of an erroneous theory buffed up as a vital critical organ. There’s no ideology here. Our beliefs are so much useful exhaust for data collection, while the virus ramifies; doesn’t own, so much as co-opts, cellular selfhood, the primitive basis of ownership and all its works.

Our bodies, our lifeworlds are, as Bakker put it, artifacts of “neglect,” of networks and processes in which they are utterly and imperceptibly enmeshed. Neglect of our reusable databodies, the intimate mappings between population level changes, technical systems and the biologic nodes which enable and sustain our options within the Assemblage.

This: all massively supervenient on structures we neither perceive nor control, on processes that (as in a viral pandemic) traverse biological, chemical, social and technical domains. Even the intensive, joyful cyborg is ill-equipped to address these multiple transductions since (as with such systems) they are deeply non-agential.

Yet, as with the case of technical change, the contingency of human life they portend, is embodied too much, like a phlegm. We feel, our personal isolation, our fear of the unseen one walking into our path from an alley, foraging excess bodies strung out on panic across the lay lines of the Event. We’re blundering like rabbits into Area X. It’s like Lovecraft’s Old Ones returned but edited themselves into vision or memory as cursed emojis. We need maps, conjurations, that look past our mammalian envelopes. Biomorphic shock tactics; fleshless, textual, lacking in depth or “pre-discursive intensity.”

This is not the real body, or even the form of the real, but that which empowers us to intervene in it, explore and shape.

David Roden’s published work has addressed the relationship between deconstruction and analytic philosophy, philosophical naturalism, the metaphysics of sound and posthumanism. His book Posthuman Life: Philosophy at the Edge of the Human (New York, 2014) explores the ethical and epistemological ramifications of Speculative Posthumanism: the thesis that there could be agents originating in human social-technical systems that become posthuman as a result of some technological alteration of their powers. His current work considers posthumanist theories of agency and their implications for aesthetics and philosophical method. He teaches at the Open University, UK.